The scenic drive to Folly Beach has its fair share of sailboats, white osprey, and an occasional dolphin – but there’s something else that turns driver’s heads: “The Folly Boat.”

The abandoned vessel has become a Lowcountry landmark that has brought in hundreds of local artists and thousands of onlookers over the past three decades. It washed up about twenty-eight years ago during Hurricane Hugo, the worst hurricane to ever hit South Carolina back in September of 1989. The boat was never claimed following the aftermath of the storm and now sits on the edge of the highway next to a salt marsh.

Over the years people have painted all sorts of things on the hull of the boat. The best part? There are no rules and anybody can participate. From memorials to wedding announcements to advertisements for local festivals, it has become a source of bringing the community together. Folly Boat has become so popular that it has undergone multiple clean-up jobs after the paint has become so thick that the layers began to fall off the sides of the vessel. The boat is a perfect symbol for the funky, feel good vibes of the Folly Beach community that we all know and love. 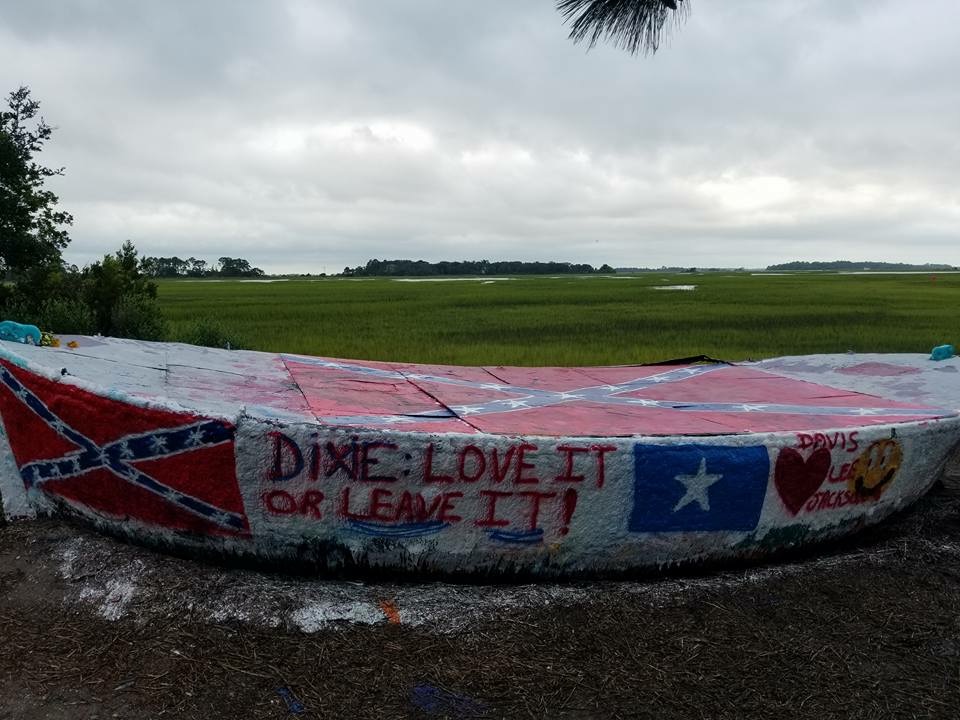 However, our little boat has found itself in danger of being taken away. This year, the Folly Boat has become a primary target of the S.C. Secessionist Party. This group wants to draw attention to the ongoing failure of the S.C. General Assembly to properly display the Confederate flag that was removed from the State House two years ago. They have been conducting a “flagging” campaign across the state, painting the Folly Boat on numerous occasions.

The Folly Boat has become an identity to Folly Beach and has brought in an influx of artists that makes this community so special. It would be a shame to see the boat taken away due to one group’s actions.