Much like the signs of the zodiac, the Lowcountry is made up of towns and cities with their own traits and characteristics that make them unique. And, because everything can be compared to a zodiac sign, we’re breaking down which part of the Lowcountry you are based on your astrological sign.

As a Taurus, you enjoy being pampered and experiencing the finer things in life, but you also crave outdoor adventures. You like the best of both worlds and what other city in the Lowcountry knows the best of both worlds better than Hilton Head? This little island has it all from epic spas and luxurious resorts to sport fishing charters and ziplining.

Gemini’s are history-obsessed and love learning new things, so naturally, Gemini’s would be the oldest town in not only the Lowcountry but the whole state. Beaufort’s history dates back to the early 1700s and with that much history in one city, there’s something new to learn each and every day.

Not to be confused with the entire town of Bluffton which you’ll see later in this list (talking about you Capricorn), Old Town Bluffton is a safe, laid-back town with beautiful views and makes for a perfect place to raise a family. And, Cancer’s are all about family and relaxation.

Oh, Leo’s. You are the glam ones of the bunch. You enjoy being admired and like to be seen as radiant and magical. Much like Kiawah. Between Kiawah Island’s sprawling mansions and world-class golfing, it’s definitely the most glamorous part of the Lowcountry, just like you.

Quiet, careful Virgo, you are the epitome of small-town vibes. You don’t like to stand out or speak up unless needed and you enjoy living your life without anything shaking up your normal routine too much. You’re not over the top and you’re pretty practical, which is why you’re the Walterboro of the Lowcountry.

Seabrook Island is the more lowkey Kiawah Island. It’s not as flashy, but just as gorgeous and relaxing and everyone still adores you. And, when you’re an island most of your residents tend to socialize which is just like you, you social butterfly.

You’re the mysterious one that not everyone knows about but when they find out about you, they’re absolutely obsessed. Similar to Sullivan’s Island which is often overshadowed by Isle of Palms and Folly. Don’t ever feel bad for Sullivan’s and Scorpios though, they know their charm and what they’re capable of.

Capricorn’s are some ambitious people. When they set out to do something, there’s no stopping them. And, when Bluffton first came about it was only one square mile. Now, that part of town is simply known as Old Town Bluffton and the entire town of Bluffton has a population over 20,000. It was the little town that could and did.

Little creative Picasso’s. Much like Folly Beach you’re unlike anything or anyone else. You’re creative, easy-going, and eccentric. And, we’re just taking a guess but we’d say about 95 percent of Folly Beach’s local residents are Aquarians.

If there was one sign who would be fine wandering off alone and diving into a body of water without anyone near, it’d be you. You like to escape reality and love being around water so of course, you’d be an island. And, Edisto is one of the most secluded of the islands in the Lowcountry.

Which Lowcountry city are you? 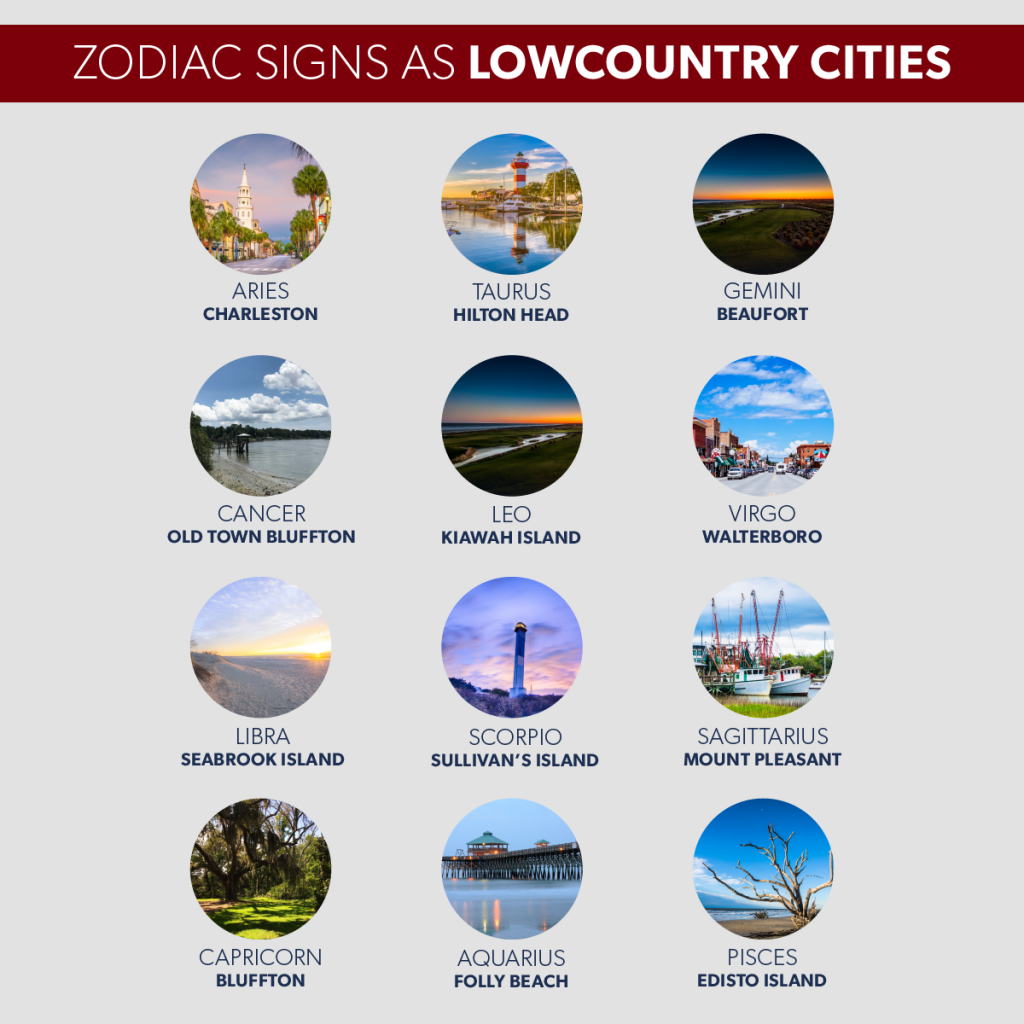