The show must go on! Despite the challenges brought on by the coronavirus, Charleston’s annual Holiday Festival of Lights will still go on this year.

The Charleston County Parks officials made an announcement on the decision to continue the Holiday Festival of Lights saying, “It may not look exactly like the festival you’ve known and loved for over 30 years, but the pandemic-related precautions we’re putting in place won’t put a damper on the holiday spirit.”

The Holiday Festival of Lights is an extravagant light display located in the James Island County Park.

This year’s Holiday Festival of Lights will begin on November 13th and continue until December 31st. The park will be open each day from 5:30 PM until 10:00 PM.

While guests will not be able to exit their vehicle, except in the event they need to use the designated restrooms, there will be drive-up concession areas for guests to enjoy.

Purchase your tickets in advance or at the gate before entering.

The farmers market looks different than usual, operating only as an “essentials market” with limited vendors. While all of the farmers and growers have been invited to participate in the market, artisans and prepared food vendors are not allowed to participate yet.

In addition to the limited vendors, there is also a limited capacity and social distancing required of all who attend and participate in the market.

Numerous vendors, who have always relied on the income received at the market, have taken a significant hit due to the pandemic and subsequent closing of the market.

Amanda McLenon, a longtime market vendor, created a petition to get the Marion Square market running again and has over 800 signatures.

“For a while, we understood it wasn’t safe to be there, so we sat back and sacrificed our livelihoods to keep people healthy,” Amanda explained. “But if people are in the bars now, we can certainly be safely open providing local produce and handmade goods outside in Marion Square.”

Listen to live music every Friday and Saturday night throughout the months of June and July. Stocked with beer, wine, and local food trucks, this outdoor arena can be enjoyed by up to four guests in each 10×10 safe space.

In order to respect social distancing, Firefly has several precautionary measures in place. Aside from general suggestions of hand-washing, Firefly has several safe spaces on their field so guests are evenly spread out. With 8-ft distances between each 10×10 square, you won’t have to stress about keeping apart. All common surfaces are sanitized after each customer’s use, and several hand sanitizing stations are scattered around the premises.

At this week’s concert on Saturday, June 27th you can expect performances from The Majestics and Lady & The Brass with special guest DJ Natty Heavy. All sets are 21+ with doors open at 6 p.m. and showtime at 7 p.m. Leave your furry friends at home and kick back on the greenspace. Each Safe Space Square is available for four friends starting at $25.00 an individual ticket.

Just five years ago, the nine members of the oldest African Methodist Episcopal Church in the South were devastatingly killed. As an act of terrorism, a white supremacist attended their bible study before opening fire. He’s said to have targeted Mother Emanuel for its stature and history. This 2015 shooting still holds a large piece of Charleston history, especially for the black community. We remember those lost and affected by the Mother Emanuel shooting.

Today, this issue remains as relevant as ever.

Almost four dozen protesters gathered at the Battery last week in honor of the nine victims in the 2015 shooting. This Wednesday is the official anniversary. The group’s call to action honors those who have lost their lives to white supremacy. They were met by a counter group of supporters of the Confederate flag.

With many protests around Charleston, this week is expected to especially highlight these issues. Friday the 19th is the celebration of Juneteenth, also known as Freedom Day. The holiday commemorates the ending of slavery throughout the Confederate South. Community members can find numerous ways to celebrate Juneteenth this year. Join Juneteenth Rock Hill on Instagram and Facebook Live for a virtual commemoration.

This summer isn’t a bummer thanks to the announcing of the RiverDogs Youth Summer Camps. Even though the 2020 baseball season remains delayed, that won’t stop the Charleston youth from practicing their grounders. Beginning Tuesday, June 16th, RiverDogs director Chris Singleton and his team welcome sign-ups for five weeks of baseball camp.

You can find them at Joseph P. Riley, Jr. Park throughout the summer as camps begin. Signups cap off at 40 campers, which then splits into smaller groups of 10. With limiting the spread of COVID-19 in mind, drop-off procedures are to be enforced.

Players can expect all the fundamentals of a normal practice. From batting, stealing, to stretching, this camp covers all your bases. Campers meet at 8:30 a.m. to 12:30 p.m. each day from Tuesday-Friday. Ages 6-13 are welcome to attend. Registration cost begins at $250.

If baseball isn’t quite your forte, the RiverDogs have also announced a summer culinary camp. 15 attendees will learn proper cooking skills while crafting a new lunch dish. Meeting Monday, July 13 through Friday, July 17, students can expect a lot of exciting information packed into the 8:30 a.m. – 12:30 p.m. time slot. Pricing begins at $300 per week.

For more information and the link to registration, click here. 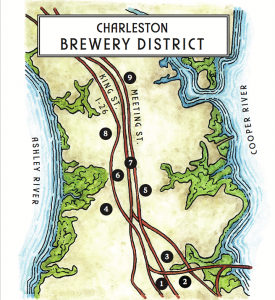 Charleston, South Carolina, is known as one of the South’s most haunted cities, boasting a variety of historic homes, inns, eateries, and forts reported to house the supernatural. Those looking for a spooky spot to eat this Friday the 13th will find no shortage of opportunities to scare up an appetite.

Perhaps the most well-known haunted dining spot in Charleston is Poogan’s Porch, boasting the ghost of a young schoolteacher and the loyal dog of a previous resident. Poogan’s is Charleston’s oldest independent dining establishment, operating out of a restored Victorian home on historic Queen Street. The restaurant is beloved for its fluffy biscuits and hot buttermilk fried chicken, still served on the porch that the original four-legged Poogan slept on every day.

Warm, homemade biscuits so good they deserve their own glamour shot. ?⠀ ⠀⠀⠀⠀⠀⠀⠀⠀⠀⠀⠀ ?: ericaeatstothebeat

Another restaurant known for its ghosts is the Prohibition-era Blind Tiger Pub. Originally serving as a speakeasy in its prime, former employees and regular customers alike have told stories of a spectral woman in black walking through the bar before disappearing. Others have reported hearing phantom footsteps and feeling as though someone is pulling their hair.

Big Chuck's Chili is here to warm you up this blustery, cold weekend. Come snuggle up with a bowl of this delight and a beer and we'll take it from there. #chiliday #yummy #winterweather

Still hungry for more? The city offers multiple haunted walking food tours and pub crawls for those who want to sip and learn more about the Holy City’s supernatural history. Schedule a private tour and learn about Lowcountry spirits like Plateyes and the Boo Hag while enjoying Charleston cuisine and local craft beers. Just be sure to share your shrimp and grits if a wandering ghost comes your way!