Open-air restaurants are all the rage this summer, as establishments adhere to COVID-19 guidelines. Luckily, Charlestonians already love to dine outdoors. While many restaurants are finding ways to create more patio seating, nothing quite compares to a rooftop view. Here’s a roundup of the best rooftop bars in Charleston for the next time you decide to hit the town.

This King Street beauty has a short, but sweet, rotating menu. With stellar drinks and a downtown view, this establishment is nothing short of fabulous. Locals love the weekend Brunch as it’s known iconically for their decadent selection. Pop a cork and cheer mimosas with friends on their open-air rooftop.

The Rooftop Bar at The Vendue

Enjoy al fresco lunch on the highrise patio at this chic hotel. For lively atmosphere and Southern architecture views, join the folks at the Vendue. On hotter days, a Strawberry Basil Lemonade will quench your thirst. Their plethora of seating offers options for parties of all sizes.

You’ll forget to check your watch as time spent on the rooftop of the Restoration Hotel is time well spent. Guests will want to head to the restaurant at sunset for an incredible Holy City golden hour. As you soak up the last of the sun, share appetizers while picking through their selection of sweet libations.

Calling all IPA drinkers! This rooftop brewery is young, lively, and perfect for an evening escape. Their large selection of home-brewed beer is iconic in this city. Crack a cold one safely outdoors at this large beer garden.

Ditch downtown and head to Shem Creek for sunset drinks at Reds. The motto here? “Inside is boring!” Enjoy this laid back setting for seafood and drinks as you watch boats float by. The occasional dolphin even makes an appearance along the creek!

Now more than ever it is important to stay home in order to remain safe and healthy! Those looking to support local businesses while they self-quarantine can enjoy these local Charleston beers from the comfort of their couch. Be sure to check in regularly for take-out deals!

If you’re a resident in the Summerville area you might’ve received an invite in the mail from your State Senator to attend informal discussions at local coffeehouses and breweries in the area.

State Senator Sean Bennett is behind the mailer “Beer or Coffee?” and hopes by inviting residents to attend these casual discussions he can open up the conversation with his constituents and discuss the issues that matter most to them.

The informal, dialogue-driven “town halls” will be held at casual settings across the Summerville and North Charleston areas. In the mailer, Sen. Bennett promises there is no hidden agenda- he simply wants to know what matters and what he can do to help.

Bennett plans to continue hosting monthly meet-ups during the legislative session, but currently, there are four opportunities to attend a “Pub Politics” or “Coffeehouse Caucus” this year.

You can find the event info below…. And maybe in your mailbox, too 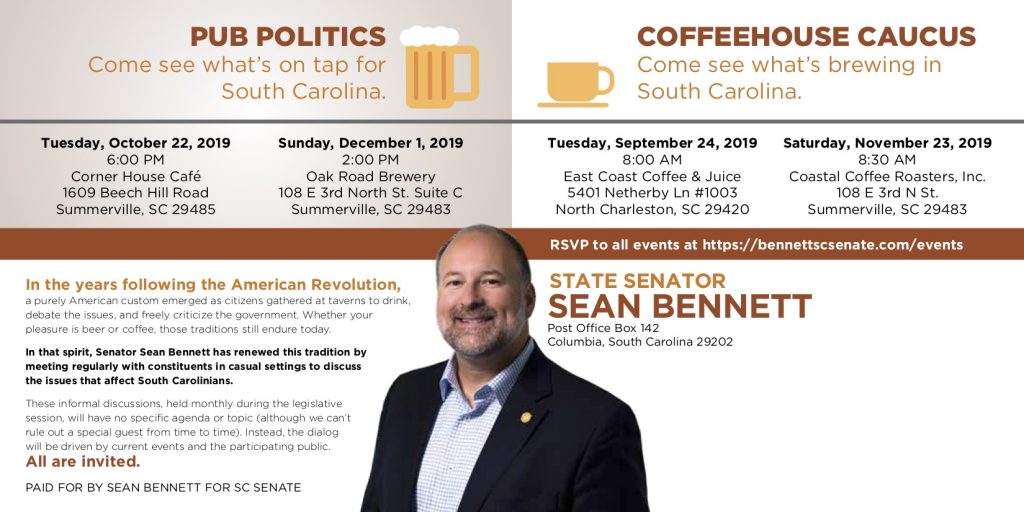 Whether you view Valentine’s Day as the most romantic day of the year, a made-up greeting card holiday, or the antithesis of everything happy in the world, today is still a reason to celebrate! Whether you’re celebrating love or choosing to just treat yo-self, we’ve rounded up the top V-Day activities the Holy City has to offer.

Take a walk on the wild side


(Because exercise gives you endorphins and endorphins make you happy.) If your Valentine is more of the adventurous sort, head over to Wild Blue Ropes Adventure Park. For just $50 per couple, you can tackle that big, bad ropes course. What better way to say “I love you” than with a heart-pumping ropes climb?

Dinner and a movie


If you’re that hopeless romantic, hop on down to the Terrace Theater for the second annual Valentine’s Date Night. Local jeweler Croghan’s Jewel Box teams up with the theater to show the cult classic, To Catch A Thief. Grab some popcorn, forget the roses, and impress your date with your classy taste for classic films.


Stupid Cupid. Maybe you don’t believe in the holiday or maybe you’re licking your wounds from a relationship gone bad. Whatever your reason for not feeling all mushy gushy, you’re not alone! Local bars The Brick and Charleston Beer Works are each holding anti-Valentine’s Day parties. With drink specials, speed dating, and even a pinata giveaway (no, really) these two bars will make sure you end the night on a high note.


Who doesn’t like enjoying a few drinks with their special someone? Frothy Beard is have a beer and cheesecake pairing. They’ll have 4 of their delcious beers available to pair with “fun flavored” cheesecakes. Not a fan of sweets? No worries, Edmund’s Oast Brewing and Bendy Brewski Yoga are hosting a yoga for beer lovers class.


We know, it’s hard to choose just one. 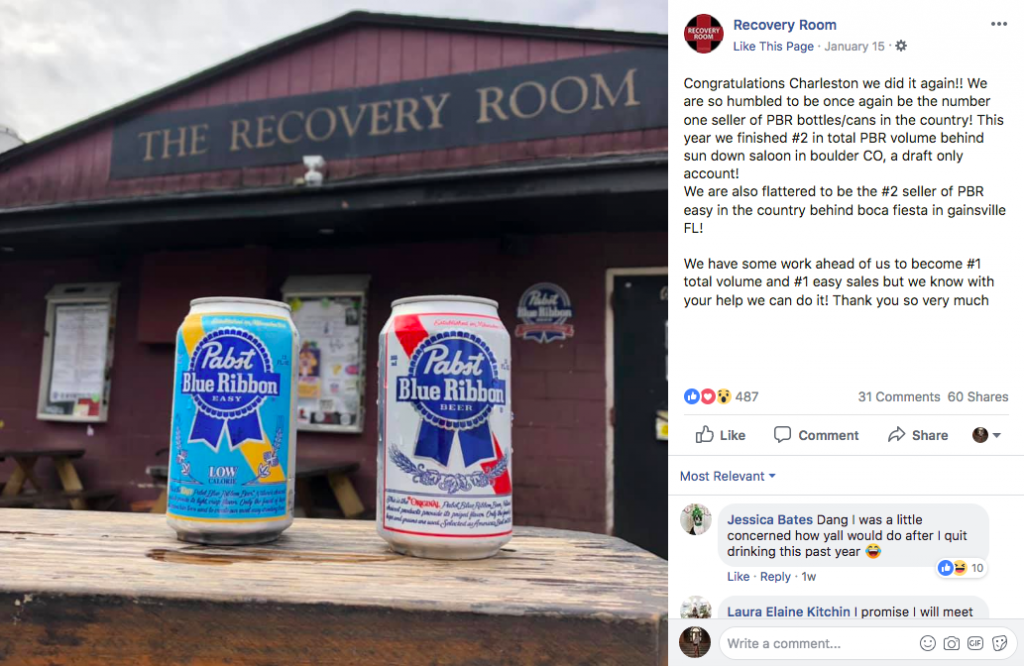 The Recovery Room, a small dive bar on upper King Street, is keeping its crown as the number one seller of Pabst Blue Ribbon bottles and cans in the country for the fifth year in a row. Sharing the news on Facebook, many users congratulated the bar on their continued success.

Typically referred to as Rec Room, the bar also earned the number two spot in total PBR volume right behind the draft-only bar, Sun Down Saloon in Boulder, CO; and is the second largest seller of PBR Easy in the country.

Rec Room is no stranger to awards though. Back in 2009 they won Best New Bar in Charleston followed by years of being the Best Cheap Bar, Best Late Night Bar, Best Pick Up Joint, and more.

Planning a night out on the town anytime soon and want to help them reach number one in volume? They’re open daily from 3 pm – 2 am with the exception of Sundays from noon – 2 am. The kitchen is open every day from 5 pm – 1 am, and they have plenty of activities to keep you busy while you wait for your food.

Come for the PBR, stay for the fun.

Check out The Recovery Room here.

There is nothing better than some free wi-fi with a side of fresh air, especially on a stressful day of work or school. Now that the sticky summer humidity is finally starting to subside, we’re sharing some of our favorite spots that have outdoor seating with wi-fi. 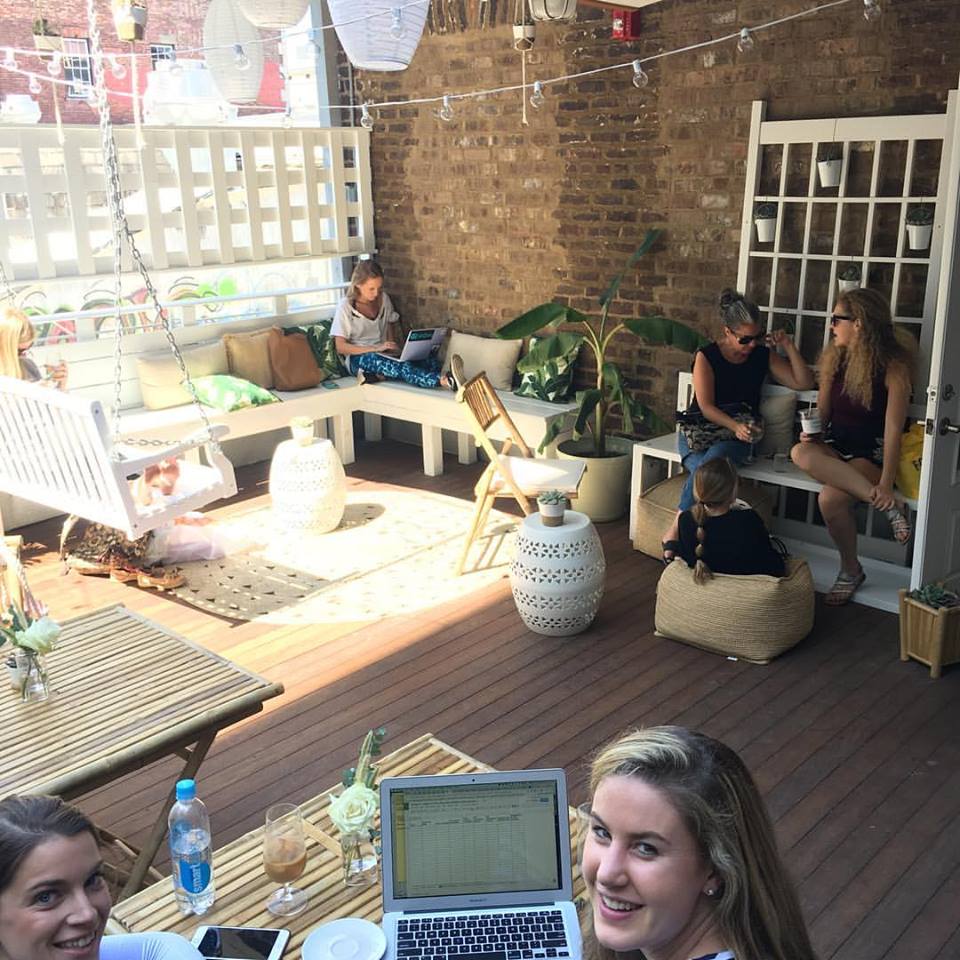 This cool new spot on King offers free Wi-Fi out on their back porch. The chic clothing store on the bottom floor is Skinny Dip but head up the stairs for a gorgeous wine and coffee bar oasis. This is the perfect place to grab a glass of wine (or their famous frozè) and enjoy some Charleston vibes. 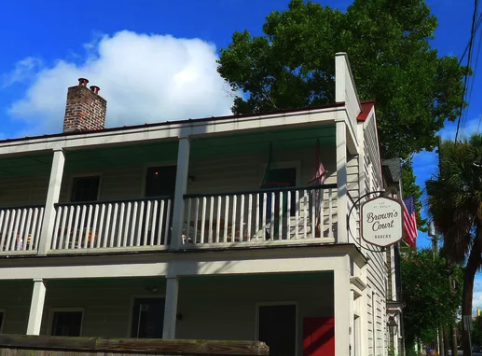 Enjoy a coffee, breakfast sandwich, or a pastry (or all three at the same time..we’re not judging) while enjoying some fresh air. Brown’s Court is a local favorite probably because it was once a Charleston house now transformed into a bakery and coffee shop. Take advantage of the free wi-fi on the top or bottom porch, or in the swinging hammock! 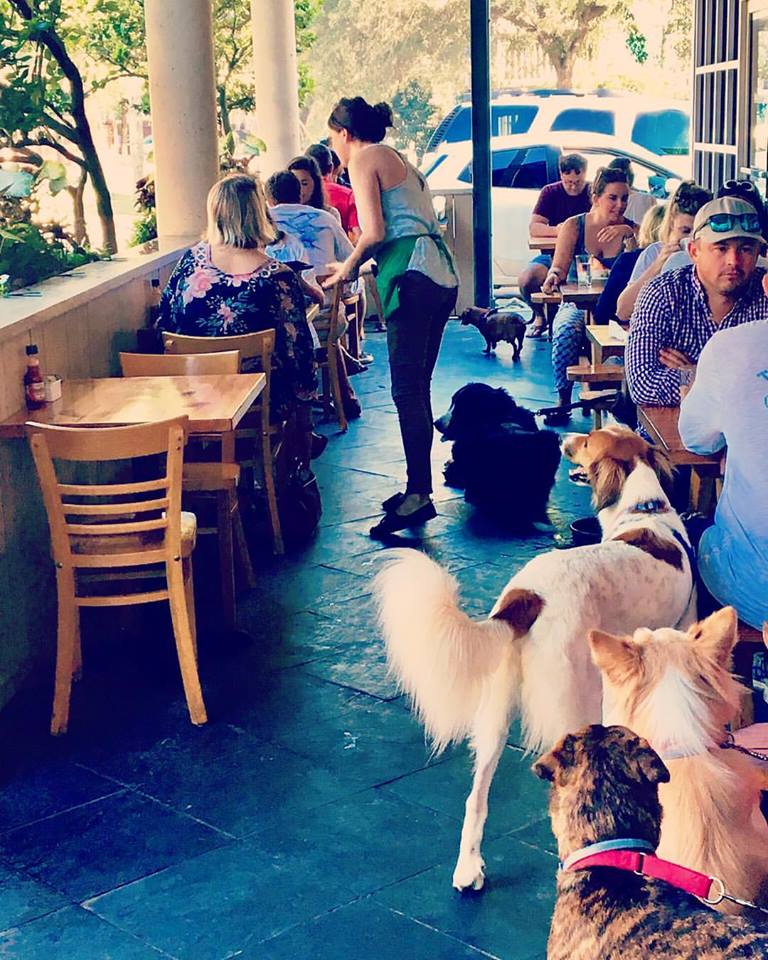 Ahhhh, Park Cafe, our favorite little neighborhood joint. It’s true, they do have some killer avocado toast but they also have a killer patio with free wi-fi! So kick back on your computer outside while grabbing a bite to eat. 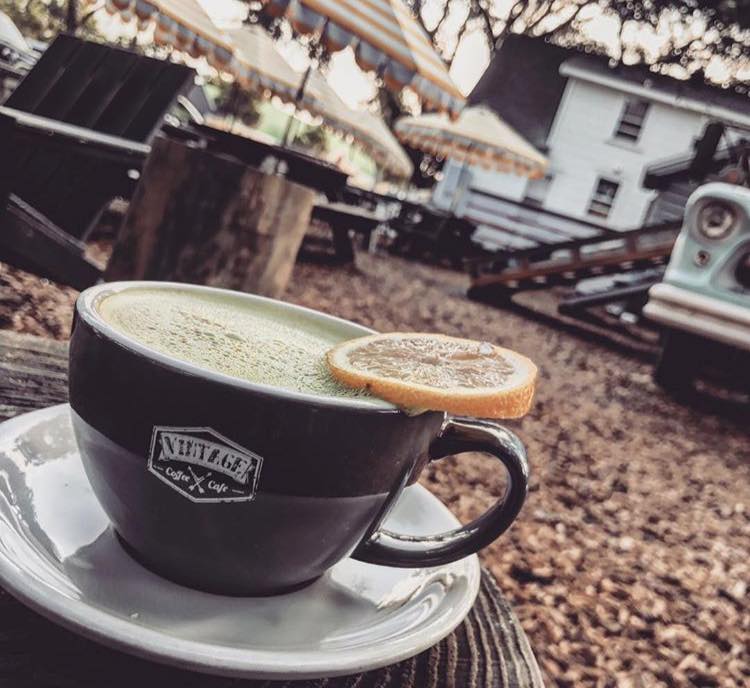 Looking for somewhere to pop down with your laptop off the peninsula in Mount Pleasant? Vintage Coffee Cafe has a great outdoor space with picnic tables. No, literally, it’s the cutest outdoor space ever. SO vintage. In addition to unique cold and hot coffee drinks, Vintage offers breakfast items such as quiches, tarts, and of course.. acai bowls. 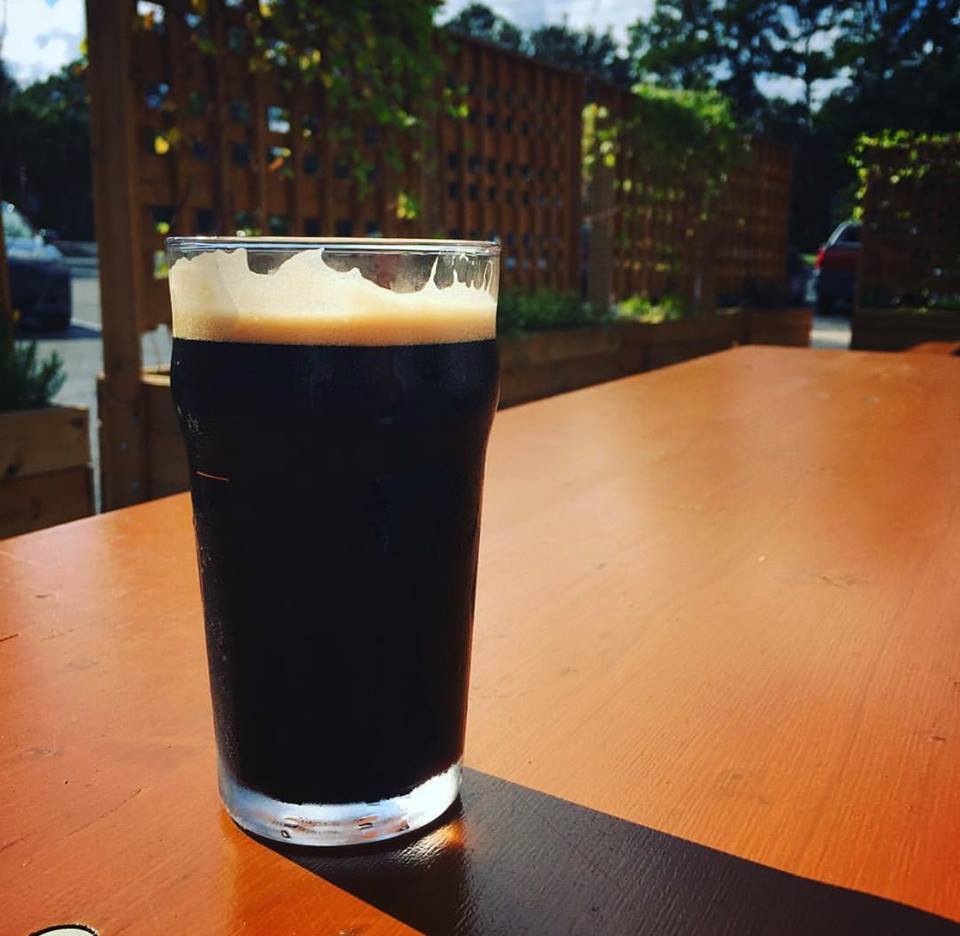 If you’re in the West Ashley area, this needs to be your go-to spot. Frothy Beard’s recently built deck has plenty of room for you, your friends, your laptops and your dogs. Nothing pairs better with work than a monster slice of pizza from Zombie Bob’s and an ice cold brew from Frothy Beard. Trust us. 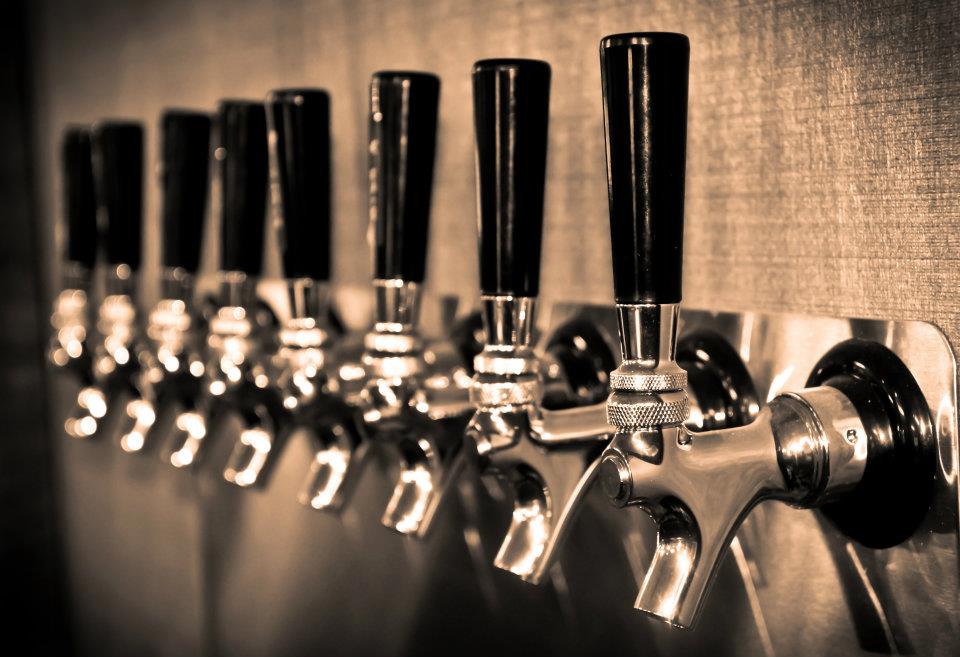