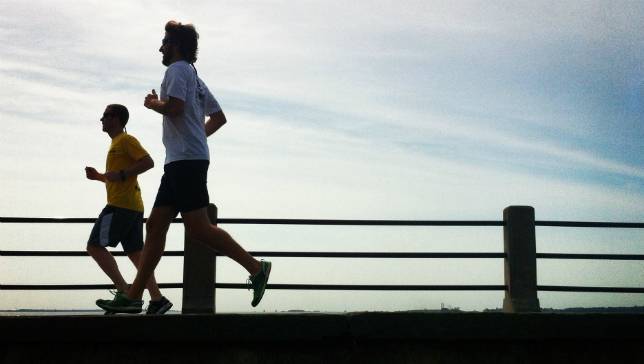 There’s nothing better than a nice view while on run, something to distract you from debating whether or not to give up on exercising and go grab a beer. Charleston is a unique city where almost everything downtown is within walking distance. Many Charlestonians don’t even need a car to get around. In a popular foot traffic town, Charleston has a number of scenic routes perfect for a run.

What better place to get your exercise in than down at the Battery? As one of Charleston’s most famous public parks, the Battery has a large sidewalk sitting right on the water wrapping around the end of the peninsula. It’s the perfect place to take in the Picturesque elements of downtown Charleston. With the brightly colored houses, the Spanish moss trees, and boats whizzing by on the harbor, your head will be on a constant swivel taking it all in.

As one of the most photographed areas in Charleston, the Waterfront Park is a perfect running route. Just off the busy streets of East Bay, the Waterfront Park is home to the famous Pineapple Fountain and large community dock. Take a jog out on the dock for some fresh ocean air, you might even see dolphins! Then make your way down the sandy trail out next to the water, winding in and out of beautiful landscaping that ends at a neighborhood friendly dog park opening up to Rainbow Row.

Take a few laps around Downtown Charleston’s tidal pond at the newly renovated Colonial Lake. One lap around the scenic body of water measures about 1.6 miles. It is the perfect place to run with your dog, away from the busy streets of Charleston, tucked into a quiet Charleston neighborhood off Rutledge Avenue.

Perhaps the best view of Charleston, the Arthur Ravenel Bridge sits 200 feet above the Cooper River and has a perfect view of Downtown Charleston and Sullivans Island. This 2.5-mile run is not for the faint of heart as it has a bit of an incline. But the view at the halfway mark makes it all worth it. Completed in 2005, the relatively new bridge has a wide pedestrian and biking path,