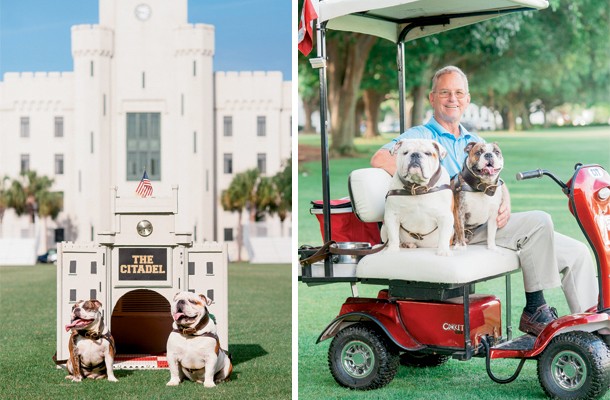 The Citadel welcomes a new mascot to their turf! Groshon, or G3 for short, was named in honor of Coach Mike P. Groshon, Citadel Class of 1976. Coach Groshon cared for the Citadel mascots from 2003 until he passed away in 2016. The English bulldog, G3, is excited about joining Cadets for all sporting events, pandemic permitting.

As his first official duty, G3 made an appearance during the Clas of 2024 Oath Ceremony on the 10th of August. This public outing was his first big entrance.

The dog was donated to the college by Dr. John Bradford, a local veterinarian. G3 is now in control of the cadets as of Aug. 6. The official Mascot Handling Team of 2020-2021 academic year consists of two seniors, juniors, and sophomores. The competitive process to become selected to join the team was conducted during last year’s rank board.

A new mascot isn’t the only thing the Citadel is welcoming this school year. A new Knob Knowledge poem has also been added.

What is The Citadel Mascot:

I come from a long line of Generals and Boos

I eat knobs and Paladins and kangaroos

If you’re scared of my bark, don’t mess with my bite

For The Citadel blue I’ll do what is right

Peace and honor, God and country, I will fight for thee

I’m The Citadel bulldog. It’s a great day to be me!