Until last year, South Carolina’s 1st Congressional District had been under GOP control. A stronghold in the Republican party since 1981, Congressman Joe Cunningham’s historic win in 2018 marked the first time a Democrat has represented the district in 38 years. So, it comes as no surprise that Republicans are fighting hard to take the seat back while Democrats are doing the same to keep it.

With the next Congressional election cycle quickly approaching, both parties are gearing up for a highly contested race which means you can expect your social media feeds to be filled with ads in support of each candidate.

A recent Facebook ad from the Democratic Congressional Campaign Committee promoting Republican candidate and founder of the grassroots organization Bikers for Trump, Chris Cox, is causing quite a buzz in the political world. 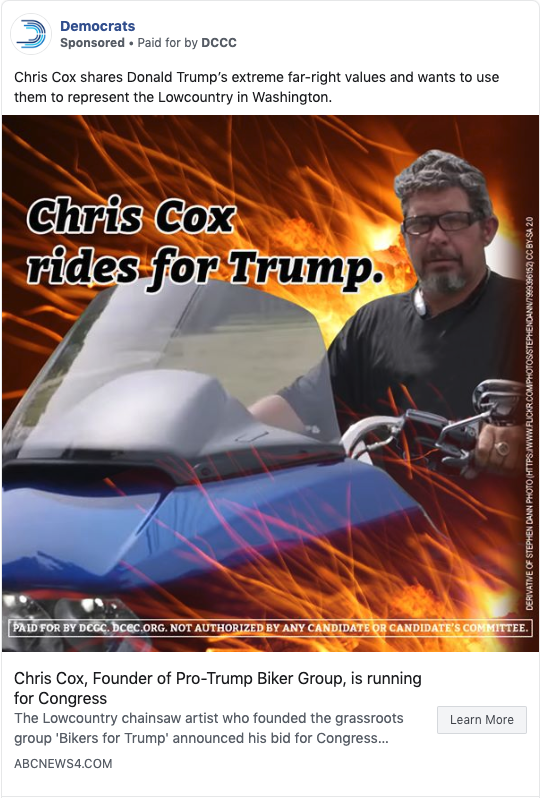 The ad, which shows Cox’s die-hard support for President Donald Trump and “his reckless agenda that would repeal the Affordable Care Act and strip health care away from millions of Americans,” according to DCCC spokesperson Avery Jaffe, was targeted to moderate and conservative voters. A demographic commonly targeted by the Republican party.

An uncommon tactic – one political party promoting a candidate across the political aisle. But that’s exactly what the DCCC is doing.

According to Jaffe, the goal of the ad was to portray that “Chris Cox is way too extreme to represent the state of South Carolina” and to keep his lagging campaign from gaining any momentum.

Political consultant and Founder of digital marketing agency Push Digital, Wesley Donehue, chimed in and stated that “it’s a pretty smart tactic to promote the weakest candidate in the field. It’s also an incredibly shady tactic. I guess the Democrats are learning how to do Facebook from the Russians.”

This is a highly contested race for many Lowcountry voters, and the DCCC is working hard to keep the seat in Democratic hands.

What are your thoughts on the now-inactive ad?