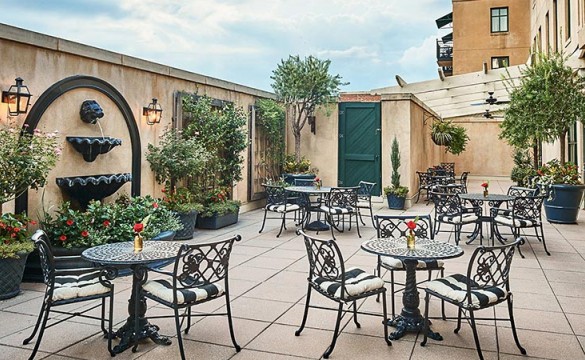 Charleston has been home to so many accolades over the years, including Top City in the World Outside the United Kingdom for the 9th year running. Now to add to the tally, Tripadvisor has released it’s annual Travelers’ Choice Awards. Charleston received a #1 hotel in the country title and 3 restaurants made the top 10 fine dining list.

The fabulous French Quarter Inn was named #1 hotel in the country and #24 in the world. Hall’s Chophouse comes in #3 for fine dining, Charleston Grill at #9, and Peninsula Grill at #10. With over 7 million visitors each year, it’s no surprise that Charleston hotels and restaurants are consistently successful.

This year, Tripadvisor’s 2020 Travelers’ Choice Awards were conducted pre-pandemic. “This has been a tough year for our industry, but the global desire to go and explore, whether the destination is an hour away or across the world, remains strong,” said Lindsay Nelson, chief of experience and brand officer at Tripadvisor. “The Travelers’ Choice program is one way that travelers and diners can benefit from the real-life experiences of other people so they can plan their perfect trip that meets their needs, budget and style.”

The French Quarter Inn is open for business this summer, so you still have a chance to book a stay. As for the restaurants, they remain practicing social distancing, and take-away is a safe option for those unable to leave their homes.

Under current circumstances, taking your Mother out for a nice meal this Mother’s day is not an option- However, that doesn’t mean you still can’t treat her to some delicious food from one of her favorite restaurants in town. These local spots are offering some great Mother’s Day meals for takeout and delivery! Be sure to check out their websites for more information and details on how to order ahead of time-

Happy Monday! Here is your gentle reminder that Mother’s Day is this Sunday. We have TWO great options to treat that special someone. Order online through the link in our bio. ? ? ? ? #togocery

?Last Call for Orders!? The best Mother’s Day starts with @halls.signatureevents ? Swipe ➡️ to see Halls Signature Events’ Mother’s Day picnic packages. Each picnic comes in a logoed Halls bag and serves four people. ? Please note on the Halls picnic: steak boxes come ready to cook and the tenderloin is cooked to order. ? Scheduled curbside pick up will be at Halls Signature Events (5 Faber St.) either Saturday, May 9 or Sunday, May 10. Visit our website hallschophouse.com or call 843-242-3185 to order before TOMORROW Thursday, May 7 at 5pm! #myhallsathome #chseats #myabsteaks

? Here is a TOAST to all of the amazing mothers out there ? We have you covered with take-out breakfast in bed for the whole family! All orders must be placed by Saturday May 9th by 12pm To order call: 843-534-0043 Pick up times are Sunday, May 10th 9-12pm Kit 1: ? Short Stack or Traditional French Toast Option ? Homefries ? Eggs ? Choice of Bacon/Sausage/Turkey Sausage Option to add: ? ? Eggs Meeting Street Crab Cake and Fried Green Tomato Remoulade Kit 2: ? Shrimp & Grits served with lobster cream sauce Add in: ? Mimosa Kits ? ? Freah Squeezed OJ & champagne $20 ?Poinesettia (cran & champ) $15 ? Mock-mosa: OJ & Ginger Ale $4 togo cup

If you ask any Charleston local (or visitor) what their favorite steakhouse is, odds are they’ll say Hall’s Chophouse. With high-end steaks, handcrafted cocktails, and family sides to drool over, we can’t help but agree.

Obviously doing something right in the kitchen, the family-owned restaurant now has four locations, including Charleston, Columbia, Greenville, and as of today, Summerville. The new location opened Wednesday, September 18 at 4 p.m. in the Nexton development and is a whopping 6,800 square feet.

The local favorite is one of many favorited Charleston restaurants to expand to the Nexton development.

Earlier in the year, Taco Boy, opened in the area making it the restaurant’s third location. Other locations include Huger Street downtown and Center Street on Folly Beach.

Soon to follow with their grand opening is Paige’s Okra Grill of Mount Pleasant and Poogan’s Hospitality.

Poogan’s, known for Poogan’s Porch and Poogan’s Smokehouse in the Holy City, will welcome their third location, dubbed Poogan’s Southern Kitchen, to the Nexton development in early 2020 along with Paige’s Okra Grill. And, while you can’t make a reservation to either until 2020, reservations can be made for Hall’s Chophouse Summerville now!

The martini is one of the most iconic cocktails in the world dating back to the 1800s. Throughout the years it was often seen swooshing around in the hands of movie stars and singers, such as Frank Sinatra and Dean Martin. The strong cocktail is known to make the drinker look and feel more confident and relaxed. Order it dry, wet, dirty, with a twist, shaken or stirred and hold it up proud.

Below we’ve ranked the best places to find a Martini in Charleston.

Get in the Halliday spirit with a Peppermint Sol Shake and candy cane rim! #deckthehalls #happyholidays #CHSdrinks

Every year Yelp compiles a list of the top 100 restaurants in the United States with the help of the Yelp community, dubbing these restaurants “The Top 100 Places to Eat in the U.S.” Just recently released was Yelp’s top 100 places to eat in 2019 and this year, two Lowcountry restaurants made the list.

With over 25 million reviews in 2018 alone, Yelp’s sixth annual “Top 100 list” consists of restaurants which received the highest reviews and rankings, with the number of reviews taken into consideration.

So which two Lowcountry restaurants were tasty enough to land in the top 100?

On the list for the second year in a row, Hall’s Chophouse has over 1,500 reviews and 4.5 stars. In 2019, Hall’s finds itself in the number eighteen spot, falling a bit from the number fourteen spot in 2018.

Despite the move, Hall’s remains a top restaurant in Charleston and the country. According to their Yelp profile, visitors enjoy the filet mignon, she-crab soup, burger, wedge salad, and french toast the most.

Some of their top dishes include crispy pork belly, honey toast, ramen, and wagyu beef according to their Yelp profile.

What are your thoughts? Have you tried either of these restaurants before? Do you think Yelp left a Charleston favorite off?