The vote comes after years of planning and fundraising, which was a success in itself. Over $90 million was raised in support of the museum along with contributions from several donors including the city of Charleston.

Since 2000, former Charleston Mayor, Joseph Riley has been working to build an internationally recognized museum on Charleston’s waterfront at Gadsden’s Wharf. This site is specifically important to the African American community as it marks the place where more enslaved African Americans arrived and were sold in the U.S. than any other location in the country.

As reported by the Post & Courier, shortly before Tuesday’s vote, Riley said, “It’s a very exciting moment in the history of the museum and our community.”

However, even with all of the support, there are still community members who are against the current building design. The group goes by the name “Citizens Want Excellence at IAAM” and is opposed to the current building design of the museum. They feel it should be changed to “reflect specific elements of African and African American culture,” and are also concerned with how the narrative of enslavement will be told at the museum.

Michael Moore, the museum’s first president, and CEO, has been heavily involved in the planning and fundraising as well to prepare for the museum’s groundbreaking. A formal groundbreaking ceremony is expected to take place in October of this year with a museum opening in 2021.

History. There is so much of it in Charleston. But not all of it is history to be proud of.

In 2020, Charleston will become home to the International African American Museum. The $100 million, 40,000 square foot facility will teach visitors about African American heritage along and with how freed and enslaved Africans shaped economic, political, and cultural development. All while offering some breathtaking views of Charleston and the Cooper River.

Charleston served as a port for African captives arriving in the U.S, so this museum will connect deeply to the heritage the museum will aim to commemorate. Historians estimate that more than 90 percent of all African-Americans can trace at least one ancestor to this land. 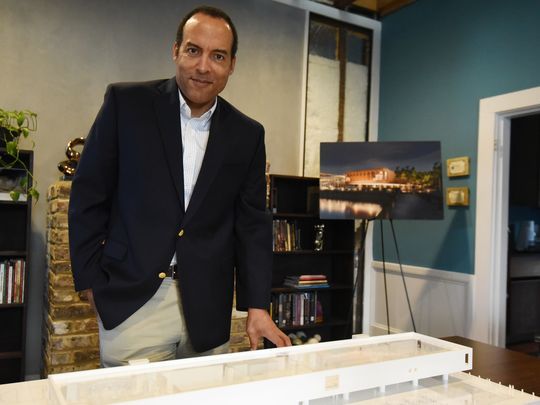 “We’re trying to create an experience that tells the truth about history, that delivers an unvarnished history,” Michael Boulware Moore, President and CEO of the International African American Museum said, “but that does it in a way that people, regardless of their background, walk out feeling uplifted, feeling inspired by the perseverance of the people they’ve learned about, by just the grittiness of what they went through and the fact that they overcame that and contributed great things.”

Moore’s passion for this project hits close to home as his great-great-great grandmother took steps at the exact location the museum is on. This now scenic and beautiful site was once the epicenter of America’s ugliest enterprise – slavery. Nearly 250 years ago, the area was mostly marshlands. That all changed when Charleston merchant Christopher Gadsden converted it into the largest wharf in North America. At first, the wharf was used primarily for the rice industry. It eventually became a hub of the international slave trade.

From 1783 to 1808, approximately 100,000 enslaved African men, women and children were forced into ships and carried on a voyage through darkness across the Atlantic Ocean into the Charleston Harbor.

This museum will connect visitors to their ancestors where it is likely that all African Americans will have a connection through Charleston.

“We know that she landed here. That’s sort of my original anchor to Charleston. It’s really deep emotional territory for me,” he said.