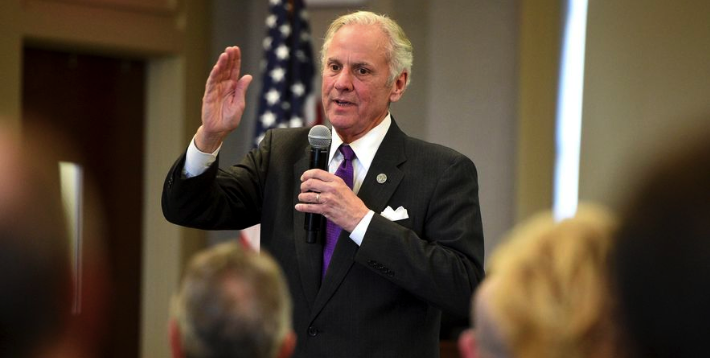 There are so many wonderful aspects to living in the Lowcountry, however, we can all agree that flooding is not one of them.

Unfortunately, this issue is only going to become exacerbated over the next couple of decades. The Union of Concerned Scientists estimates that nearly 8,000 homes in Charleston County would flood at least 26 times a year if the sea level rises by just 2 feet.

Recently, Governor Henry McMaster addressed this threat and the importance of protecting our coastline during the last gubernatorial debate – in his own unique manner of speaking.

The key takeaways from Governor McMaster’s statement highlight a very serious – and ever-growing – concern for the Holy City: “I know water’s coming up in Charleston … It’s a real threat to us. We’ve got to be very careful with the coast and got to protect our economic engine.”

South Carolina ranks fifth in the nation for most homes at risk in 2045, with properties such as 29928, Hilton Head, and 29455, Johns island being among the top zip codes threatened by frequent flooding. At this rate, roughly around 24,000 people living there today could be displaced and with sink property values decreasing, this would cause large-scale problems for the housing market and the tourism economy.

What used to be known as a nuisance to any Charleston local, flooding is no longer just a minor annoyance but a major issue that needs to be addressed before it’s ‘too little, too late.’ We’re hoping that Governor McMaster follows up his rhetoric with decisive action that makes the issue of sea level rise a top priority.

Since Charleston’s founding in 1670, our city’s rich culture, thriving economy, and beautiful scenery have drawn millions of visitors from every corner of the world to our coast for generations. Still, today in 2018, Charleston is a vacation destination, and enjoys unprecedented levels of growth, as any resident is well aware.

With growth though comes growing pains, and there are many issues Charleston faces that we should address. One direct threat to the Holy City in both the short and long-term is sea level rise. Throughout the previous two decades in South Carolina, tidal flooding has increased by 300 percent, with the sea level rising 10 inches on our coast since 1950. If that doesn’t worry you, this should: the rate of sea level rise has tripled in the last 10 years alone, with the water rising an inch every two to three years.

At this point, it is obvious to all of us the risk sea level rise poses to our city. With flooding comes more difficult commutes, damage to our roads and bridges, and destruction of our world-class beaches. Ultimately, this negatively impacts the Charleston economy by hampering tourism and increasing costs and living expenses on Charlestonians through higher taxes to pay for emergency management and infrastructure repairs.

What is being done to combat this growing problem? Fortunately, at the national level, there is growing awareness in Congress from both Democrats and Republicans that the issue of rising sea levels must be addressed. For example, Republican Rep. Carlos Curbelo (FL-26) and Democrat Rep. Seth Moulton (MA-06) are working together to build bipartisan support for their new legislation, The Flood Protection Act.

In Charleston, our city and her citizens have taken the danger of sea level rise to heart. Since the 1980s, Charleston has implemented an effective flood mitigation system that drains floodwater into local rivers.

While the flood mitigation plan is a good first step, the problem of sea level rise is only going to get worse without further action. We must all encourage leaders like Sen. Tim Scott, Charleston Mayor John Tecklenburg, North Charleston Mayor Keith Summey, and State Senator Chip Campsen to make the issue of sea level rise a top priority, both at the national, state, and local levels. We need them to work together to find solutions that will keep Charleston a thriving and growing city for generations to come.